Sawako Utsumi is a modern Japanese artist who focuses on personal landscapes, nature, culture, aspects of Japanese art and re-awakening famous artists but with a twinkle of personal shades, altered images to a minor degree, fusions of culture and unique angles that apply to her own personal art. Of course, with so many amazing artists from the past it is intriguing that Utsumi focuses on such varied European artists. This currently applies to L.S. Lowry, Maurice Utrillo and Esaias van de Velde. However, in time other European artists will be highlighted within her art, various Japanese art forms, individual landscapes, cityscapes, religious art and other areas of art that reach her inner artistic soul.

In the realm of fame, history, time, religious values and natural landscapes then Esaias and Utsumi are a million miles apart. Despite this, in the world of art then anything is possible providing the natural feel is linked with passion and admiration. Therefore, for Utsumi it is natural to flow between time, space, concepts and ideas because the mystery of Shintoism isn’t constrained by religious orthodoxy.

The art piece by Utsumi titled Esaias van de Velde in Japanese Light (top and second image) is extremely intriguing because unlike the original sketching by Esaias the focus of Utsumi is to create her own individual color scheme. On top of this, individual elements by Utsumi increases the awareness of the respective viewer.

Also, another art piece by Utsumi titled Japanese Reflection of Esaias van de Velde works a treat with Esaias van de Velde in Japanese Light because you can easily imagine these places being either neighboring villages – or the same village but during slightly different periods of the year. This reality is far from the original two art pieces by Esaias therefore this fact is extremely intriguing.

In another article I comment: “The female contemporary artist Sawako Utsumi adores the exquisite landscapes of Esaias. It could well be that Esaias reminds Utsumi of aspects of her childhood in Sendai and her visits to the countryside of Fukushima – and other rural communities in adjacent prefectures. Therefore, the rural landscapes by Esaias and other artistic themes by this sublime artist appeals greatly to Utsumi.” 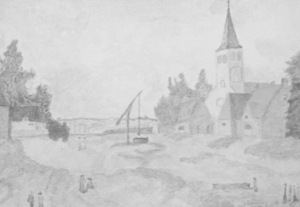 Esaias passed away in 1630 and hails from distant Holland. This reality is a far cry from Utsumi who was born in Japan and is a contemporary artist. Despite this, and the enormous differences in culture, religion, modernity, space and time – the amazing art and legacy of Esaias suits the thought patterns of Utsumi. After all, the search for inner peace, a place called home in a chaotic world, adorable landscapes, nature and natural artistic dimensions aren’t set in stone. Given this reality, Esaias van de Velde in Japanese Light and Japanese Reflection of Esaias van de Velde by Utsumi are two adorable art pieces that pay homage to Esaias, while highlighting the enormous individuality of Utsumi and focusing on her own personal concepts. Also, the religious and cultural themes play into past interactions between Holland and Japan based on the mirage of Dejima but with the end result being “light.” 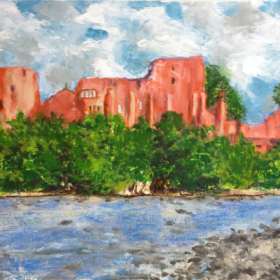 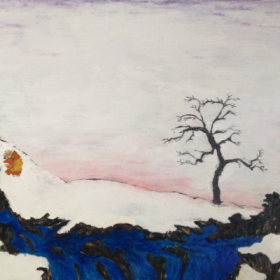 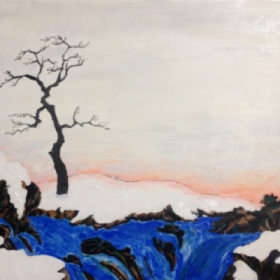